COVID-19 Alert   We have changed our procedures for COVID-19.   Learn More

Symptoms and Types of Astigmatism

If you think you may have astigmatism and live in Derry, Londonderry, or near Windham, visit your eye specialist for an eye exam . There are several types of astigmatism which all have similar symptoms.

People who have astigmatism in one or both of their eyes will typically experience vision that is blurred or distorted at any distance instead of only objects that are near or far. It’s common for astigmatism sufferers to find themselves squinting frequently. The eye strain caused by uncorrected astigmatism can lead to headaches after activities such as reading. 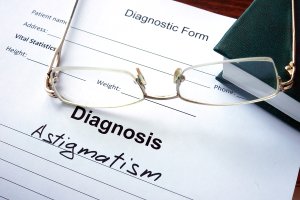